To Vote or not to Vote

It seems that whenever news correspondents quote polls regarding the upcoming elections they use the term, “People say…”.  What people?   Are they talking about people who could vote or people who actually vote?

I started doing some digging from a marketing perspective and I discovered something that cheered me up because it presents a compelling problem. 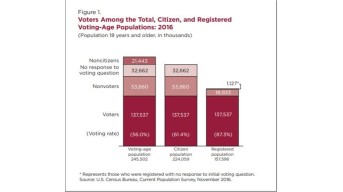 So why don’t they register? Here are the reasons they give.

The #1 reason for not registering, by far, is a general lack of interest in the political process.  Simply put, 36% of the US population of voting age can’t be bothered with politics.

That is fine.  I’m not interested in gambling, fashion, home heating sytems, and a slew of other things that are important to millions of people but don’t provoke a scintilla of curiosity on my part.

But should peopole be interested in the political system?  Well, it impacts taxes, education, healthcare, national security, the roads we ride on and the bridges we cross. In short, politics, whether we like it or not, has a bearing on almost everything in our daily lives.

Then I was curious as to why so many of the people who are registered to vote don’t actually go out to vote.  I thought there would be some compelling reason like disgust or mistrust with the system and process. But I was wrong.  Here’s what I learned.

The main reason, and growing fast, for not voting is dislike for the candidates running for office. From the spike in dislike from 2012 to 2016 it is obvious that people REALLY dislike the two candidates for office the two major political parties were offering.

So you have people who don’t bother to even register to vote because politics doesn’t interest them — although it should and in a big way.

Then you have people who registered to vote but didn’t because they viscerally disliked the two people competing for office.

So as marketers what does this say?

It tells me that people have to be persuaded to take political policies personally. We take eating, dressing and recreating very personally so why not politics? Eating affects our health. Dressing affects our self-perception. Recreating affects our emotional well-being. Politics? It affects the very lives we lead in a variety of ways.

As for the people we elect to office it is obvious that we take this aspect of politics very personally. We won’t go to the trouble of taking ourselves to a polling station which means spending personal time and effort, unless we are going there to give an individual our most precious democratic possession — our individual vote.  We have to like the candidate personally. There has to be something about her or him that we find attractive, personable and relatable.  There has to be a positive chemical reaction when we see and hear this person.

So if I were marketing the upcoming Presidential election I would approach it as a two-step process:

I hope we all go out and vote. Our future depends on it.  Truly.

Advertising copywriter, Creative Director and state of New York college professor. I love true stories. Who doesn't?
View all posts by nhbrownlee →
This entry was posted in True Stories. Bookmark the permalink.